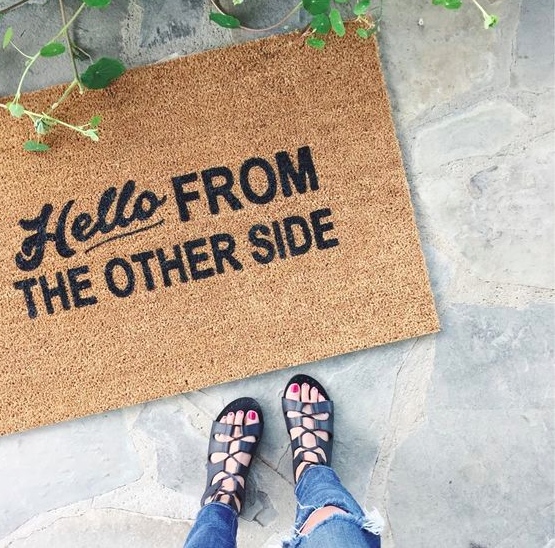 The best thing about life is that everyday is a new opportunity.  As cliché as that may sound, it rings true.  Many of you know that on December 12, 2016, I underwent a rare procedure called HIPEC in an effort to provide myself with a greater opportunity to live.

There were many risks involved in having this operation, but without risk comes little reward.  I had to take that leap of faith in order to provide myself with more time and quality at that.  No doubt I had my reservations and up until the night before I was having serious second thoughts.

“Can I even endure this again, will my body be able to handle another major operation for the third time in three years?” I asked myself. My mind would not and could not stop operating on all cylinders.

Saturday, December 10 I had just been out with my Mum for a lovely day of brunch and pedicures.  It was special, quality, time before I was going to go into the hospital in just two short days.  After our pleasant day she dropped me off and Steve was at his parents house.  I lay on my bed as I was pretty worn out from the whole day and was going to try to catch a nap, when suddenly something came over me and I began thinking about the last few weeks prior and how I’d spent time with the people I love most; quality one on one time.  Were those my goodbyes?  I immediately began to shiver, my lips turned blue, my breathing became increasingly difficult and my body tense.  I thought I was dying right then and there.

As quickly as I could I called my Nan and word travelled fast.  She along with my Mum and Auntie Bev were on their way, as well as one of my very best friends, Allison.  Steve, too immediately left his parents.  No one truly knew what the situation was but knew in any case I needed immediate attention as my normally ever so strong brick walls had come crashing in on me.

Once they had arrived, I was clearly still very much alive but also in a state of panic and still freezing and stiff. They comforted me and Allison even called her brother with whom is an ER Doctor to get some medical advice on what they should do since I was refusing to go to the hospital.  If it actually was my time, I wanted it to be in my own home, not the cold hospital.  Her kind brother suggested that I meet everyone halfway and allow the paramedics to come and assess the situation and I obliged, particularly because those were Steve’s wishes as well.

Long story short, there were about five paramedics that came and determined I was having a forceful anxiety attack and low and behold my walls did cave in on me.  After awhile I calmed down and I was so grateful to have them by my side.  And I was happy that it happened when it did and not the morning of the surgery. For some reason I believe that, that freak out needed to happen in order for me to actually go through with the surgery, for me to know that everything was going to turn out okay in the end.

It was now time to be the queen I know I can be.  It was Monday and it was show time.  I rolled into that operating room feeling free of anxiety or fear, but instead excited for what was on the other side, post operation, despite the brutal recovery.

The Doctors practiced their magic and before I knew it, I woke up in the intermediate care unit.  I felt fabulous as the drugs from the operation were still in my system, even making a video of the news that had been shared with me that I was “CANCER FREE!” It felt so good to say those words, even if I was in la-la-land.

However, as the course of my stay at the hospital got longer and longer, the Doctors became less and less liberal with that word.  In turn leaving me to wonder what any of it really meant, even having it reiterated today at my follow-up visit with my surgeon now that I’m completely clear headed.  Where do I go from here and am I free of cancer?

The truth is, I’ve won the battle but not the war.  By having this surgery they have removed any and all signs of tumor that currently exists in my body, by cutting me open to remove them, scraping my insides and attacking with chemotherapy.  Therefore at this time I’m free of cancer.  However, I still remain a Stage IV cancer patient as I have had recurrences in the past, ones which have recurred rather quickly I might add, so I am considered a VERY HIGH RISK patient.  My cancer could come back tomorrow, next month or two years from now.  The moral of the story is I will be under surveillance non-stop by my Oncologist and looked after by the pros.  Naturally we all are hoping for the best-case scenario, but he kept it real with me, which I appreciate.

In the meantime, I’ve been home for the last week and a half recovering and it’s going well.  Slowly but surely I’m getting back to my old self.  I cannot express the gratitude I have for all of the love I’ve received leading up to the surgery, during and after.  It truly warms the cockles of my heart.  Now we are just trying to get through the holidays and get back into our routine.  When things get too routine, I just need to keep myself humble and remember that everyday is a new opportunity.