Words cannot express how incredibly honored and surprised I am to have artist and author, Anthony Oldham paint this insanely beautiful oil painting of me.  I have never had someone paint a picture of me, let alone something so lovely! Thank you, Anthony!

Some people may think it is strange that I also recorded the audio of Steve buzzing my hair, but what they need to understand is memories.  Now at this point in my life, nostalgia and memories is something I thrive on.  Chemo and cancer can take a toll on your thoughts and your memory due to all of the drugs, and so forth.  It’s important for me to capture the big moments, but also the little moments like this.  Our little conversations that are silly and I will cherish forever.  It was during the whole  length of while Steve was buzzing my hair.  I hope you enjoy and get a bit of a laugh. 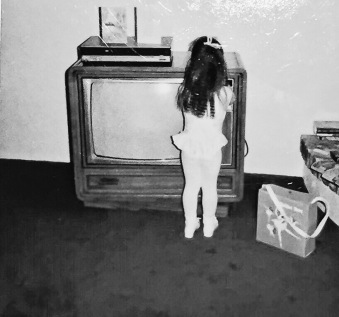 At two years of age, Dolly Parton was my idol.  In fact, I should have been the creator of an American Idol genre of entertainment, as my wide eyed vision of fame and the game was futuristic and quite unreal.

When I was younger, maybe eight, I asked my Mum to take me to a general “famous” audition to be a singer or an actress.  Aside from wanting to be just like my gorgeous Mum, I loved Dolly, Pasty, Marilyn, Edie and I can’t leave out, Mary Poppins .  For as far back as I can recall, I genuinely believed that being just like them, a celebrity, would be a hop, skip and a jump (all things I thoroughly enjoyed, on a side note).  But, I figured it would be a one stop, shop type of audition.  A decision, a yes or a no and I was certain that I had what it would take.  I loved and thrived on creativity and being famous seemed like the closest thing to being an artist — something I sought out to be when I grew up.

Being the glue to my confidence, my Mum agreed to take me when I was in fifth grade to audition to be “famous”.  Never once putting down or deflating my fleeting dream, she knew that I wanted to entertain, express myself, and connect somehow artistically.  Turns out, I cannot act or sing and I did not become a star, as we all know.

Coincidently, the first time I ever lied was to my best friend, which happened to be  around the same time I asked my Mum to take me to Hollywood.  I had told my best gal, Crystal that I sounded just like Mariah Carey and gullibly she believed me.  It was only briefly, until one day we were in the parking lot of an Astro Van dealership, circa 1993 as her parents shopped for a new family vehicle.  Boldly she asked me to sing for her. I was stunned.  I hadn’t lied before and I didn’t know how to get out of it.  She saw right through me.

By the time fifth grade rolled around, my Mum kept her promise, enrolled me in acting lessons, reached out to agents, the whole kit and caboodle.  If I would have wanted her to be a stage mom, she would have gladly signed up for the job to support me in all forms of the spectrum. The thing was and still is, I’m only good at being myself.

I had been a ham since the day I was born and my life had been documented via camcorder, by the lovely and lively ladies in my life.  It was the 1980’s and quite the BIG deal to lug around a ridiculously large camera, but they did it regardless in an effort to capture my life.

Soon after my Mum’s persistence in trying to aid my flighty dream, I realized I am absolutely rubbish at being anything other than myself.  I couldn’t pretend.  I was unable to follow anyone else’s script outside of my very own.

All the while, creativity and imagination was never lost upon me.  I was just highly unaware at the time of how to channel it; how to open the pages of my fate in the creative realm.  If I were to take it back to those years, I’d say I always struggled being phoney.

As a young adult, sans/prior to the evil cancer taking residency in my insides, I came to terms with reality and realized I had to work in order to have an apartment and the things I lusted after.  My goals had shifted, my viewpoint was more mature and University and Corporate America seemed like my only option.

Strangely, in the seemingly thick of my career, unbeknownst to me that it would end in a few short  years, my Mum randomly said that she hoped that one day I would get compensated  for being one hundred percent, Britt; for being my true self, and sharing my creative mind with the world.  Of course I agreed and appreciated her love and wildly, amazing support, but I knew for a fact that a talent I was not.  I knew how to write, dress, decorate and apply makeup like a pro; but what did that all really mean in the real world? — nothing.  I still had to earn a paycheck if I wanted to dress well and I knew singing and/or acting was out of the question.  Feeling stuck was an understatement, but I didn’t see any other way of being an “artist” and was certainly not up for the “starving” bit.  I just wasn’t cut out for it and proceeded to work towards my career climbing the ladder, never looking back down until I hit a glass ceiling.

When I became sick and inevitably had to give up my career, I felt that I had lost a piece of who I was.  It was all I had known for the past ten years.  I was well groomed and manicured to continue moving on up.  The nine to five taught me savvy business lessons, yet oppositely managed to cripple my creativity, to no fault of the Company, but otherwise due to the type of industry, numbers were all that mattered.

Once I gave up that part of my life, I began to gain my creative power back and realized that even if you do have a regular 9 to 5, it doesn’t mean you should ever give up on YOURSELF, or what makes YOU happy and ultimately charges your soulful creativity.

Being sick, my mind often wanders off to far away places. Not necessarily Neverland, but rather memories from as early as I can recall.  I think back to the little girl who thought anything was possible, who fearlessly shared her creative self without any doubt or resistance towards caring what others opinions were.

Many may see cancer as a death sentence, but I see it as a destiny.  A journey.  A life that I may not have otherwise had the complete freedom to be who I am to my absolute core.

Nostalgia is a funny thing and history is just as important as the present, as  well as  whatever the future may hold.  Without gagging with cheesedom, the best thing you can do for yourself is to be your own muse, celebrate your own sense of self and celebrity (not literally), but I know you are picking up what I am laying down.  Stay true, be you, as everything unites and comes full circle in the end.

I’m not here to find fame, fortune or anything of the sort.  I’m here to be myself in hopes that I can inspire someone, perhaps expand my social ability to connect with people on deeper levels and tell my story along the way.

As I work on a project, a walk down memory lane has been an interesting one (not sure of the ETA — probably forever).  Finding out what makes me, me, brings great hope to share that with anyone that feels they want to experience the wonderful life I have lived and will continue to live on my journey as a cancer survivor and fighter, amongst other things I am blessed with.

It may not be blogging as often as I’d liked to, although that is my New Year’s resolution, but life. Am I right?

PS-  BUT MY GOAL IS TO BLOG WAY MORE, BECAUSE DUH! 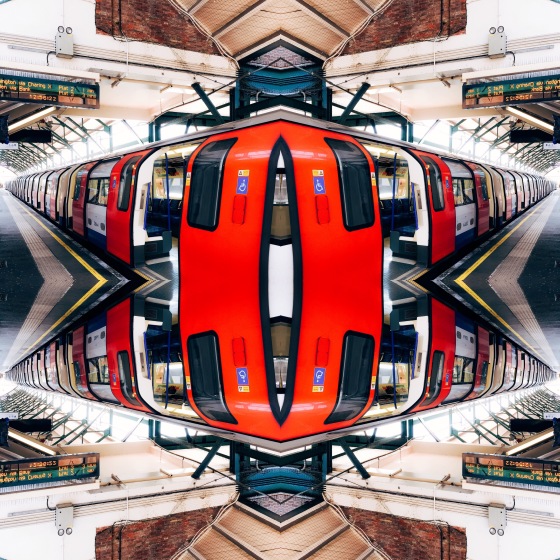 ” Living resembles the life of a train.  Chugging along as best you can.  Passengers coming and going, baggage in tow.  Scenery forever changing, leaving you to wonder — where did it go? Constant parts in motion, trusting the route is properly laid out.  The destination is not always visible, at times even jolting off track, entering dark tunnels where sometimes it feels pitch black.  Yet, if you keep chugging on, you’ll soon find that the light will eventually shine so bright.” – BKO

It’s been said that a picture is worth a thousand words, but what if I told you that YOUR photos could help a charity in need?  ‪#‎JohnsonandJohnson‬ have created an amazing app, making it possible for you to donate one picture per day, and they will contribute $1.00 to the trusted cause of your choice (list provided in app). What a better way to kick off the season of GIVING by being able to give everyday! Download @donateaphoto via the App Store. ‬ 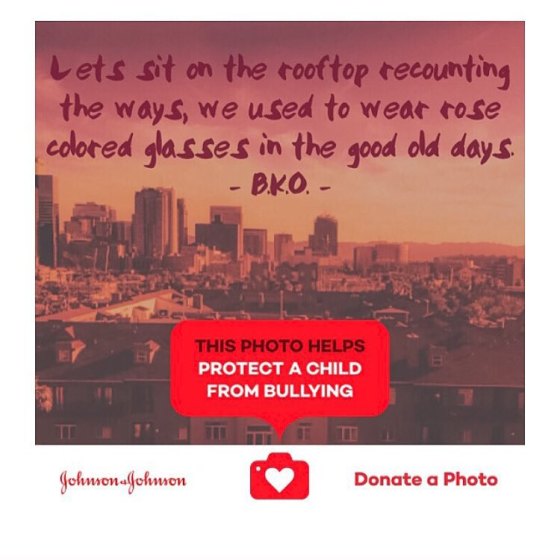