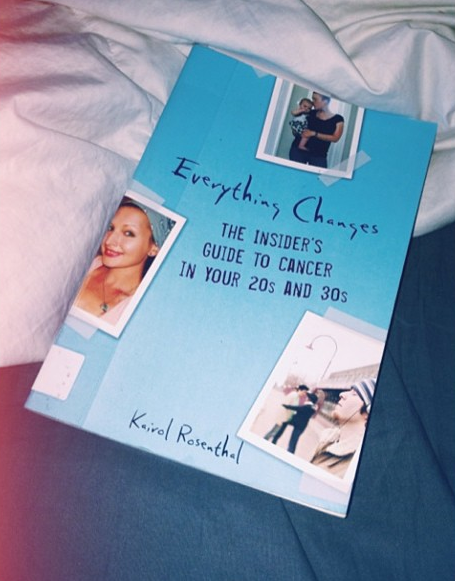 Since my life converted to becoming a full-time sick person, I have wedged my nose in books as if I were studying for the bar exam.  Cramming every inch of knowledge that the books have to lend on cancer, I am becoming more aware of the disease and how other cancer patients, specifically young cancer patients have chosen to live with their life sentence.  Also, being that I am writing a book on my experience as well, I am considering it as research and development.

My latest book was Everything Changes, by Kariol Rosenthal; “The Insider’s Guide to Cancer in Your 20’s and 30’s.”  I was really eager about this read, as the title alone displays an affiliation that I have been longing for since my diagnosis, a relative passage to how other’s have dealt with being diagnosed with cancer at a young age, how they’ve chosen to defy it and how it has shaped their lives.

Rosenthal dives into the book by briefly describing her diagnosis at age twenty-seven, being an uninsured choreographer living in my favorite city, San Francisco.  Once she was diagnosed she came to the daunting realization that being a young cancer patient did not offer a lot of resources, options and/or awareness in general.  Much like myself, Rosenthal’s diagnosis was Stage IV, although a different type of cancer.  She outlines in the book how many young people in America are diagnosed at later stages, when the cancer is more aggressive because they either don’t feel the need to go to the Doctor as often as they rustle through the pains and pangs, or they don’t have insurance, therefore they avoid Doctor’s offices altogether.

Once Rosenthal primed on her disdained life transition through cancer, she made it her personal mission to meet with young cancer patients and survivors across America.  Meeting with a variety of men and women within their twenties and thirties, Rosenthal brought their journey’s to life on paper.  Each person had their own chronicle on how cancer has impacted their life, the issues they had with insurance or Doctor’s and the capacities in which they took to live their lives, despite their malignancy.  Sadly, there were a few people in which Rosenthal discussed in her book that died, which certainly brought a realness and rawness to her narrative.

The book was informative and chock full of resources of varying kinds related to cancer, caregivers, insurance, employment, unemployment, relationships, sex and dating and so on.  Overall I would give the book four stars.  I felt as though I could connect to each of the persons in which Rosenthal interviewed, as well as Rosenthal herself.  It helped me to better understand that cancer in your twenties and thirties is a real thing and unfortunately not uncommon, notwithstanding popular belief.  If you are looking for a candid capture on cancer and all that it brings about, this is a definite must read!

For further information on Kariol and Everything Changes, check out her website:  www.everythingchangesbook.com

One thought on “Book Review: Everything Changes 📖”